A Guide to Common Cooking Oils

Cooking oil is a basic and essential ingredient in every kitchen, and whether you’re baking, sautéing, frying, or drizzling, choosing the right one can be confusing. Then of course there are health concerns, particularly around the type of fats they contain. This article takes a close look at the common culinary oils and the proper use of each one.

Cooking oils are fats derived from plants, nuts or seeds. All oils have a similar energy content (roughly 650–700kJ per tablespoon), however they differ in both the types and ratio of fats they contain; how they are made; and how they react to heat. Not only do these differences make some oils healthier than others, but more suitable for certain cooking methods.

The smoke point of an oil is the temperature at which an oil starts to smoke constantly. At this point, it is widely believed that the oil’s physical and chemical makeup can start to change, producing toxic by-products which may be harmful to our health, despite limited evidence to support this. So, when information about the smoke point of various cooking oils began to surface, Extra Virgin Olive Oil (EVOO) got a bad rap – deemed unfit for cooking due to a relatively lower smoke point. This meant people thought that EVOO was best suited for drizzling and bread dipping.

However, recent research debunks this myth. In the study, EVOO and other common cooking oils were heated up to 240°C (464°F) over 20 minutes and exposed to 180°C (356°F) for 6 hours, with samples assessed at various times. Various parameters including smoke point and oxidative stability were measured along the way, and how well they correlated with the oil breaking down and forming harmful by-products called ‘polar’ compounds. Of all the oils tested, EVOO was the most stable when heated, producing the lowest level of polar compounds. Results also showed that oxidative stability – not smoke point – is a major factor when assessing how stable an oil is when exposed to high temperatures.

In fact, smoke point correlated quite poorly with how likely an oil was to breakdown and form harmful polar compounds.

Contrary to popular belief, Canola Oil and other seed (vegetable) oils were least stable when heated and more readily broke down and formed polar compounds, despite a higher smoke point. This is because they are refined oils, higher in polyunsaturated fats which more readily break down, and are low in natural antioxidants.

Key message: When it comes to health, the priority is to choose a cooking oil that  produces the lowest amount of harmful polar compounds after heating. Despite the widespread belief of being healthy, oils with a high smoke point, such as Canola Oil, Sunflower Oil and Grapeseed Oil produced the highest levels of harmful compounds.

The more an oil can resist reacting with oxygen and breaking down, the safer and more stable the oil is to cook with. EVOO is both safe and stable for cooking, and far healthier than the other oils tested.

How the different cooking oils stack up 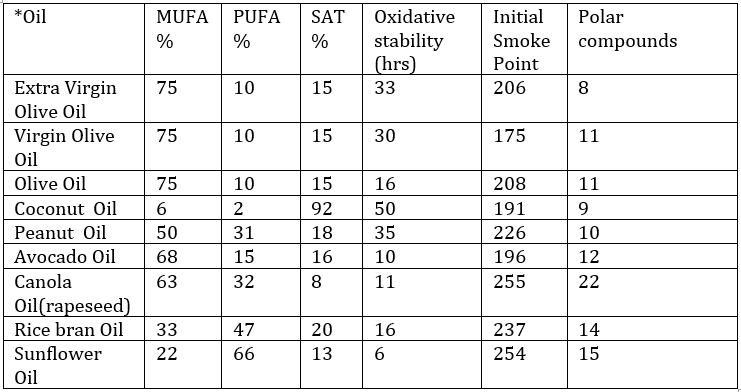 Choosing the right oil for your cooking

Common uses: EVOO is a safe, stable and desirable oil to cook with and is an excellent multi-purpose oil for high temperature cooking including baking, frying and sautéing. Rich in flavour, it’s also great for salad dressings, dipping, drizzling and marinades.

Common uses:  Less versatile than EVOO due to breaking down more readily under heat, and not as flavorsome for drizzling due to its neutral flavour.

Common uses: Canola Oil is typically used for home cooking and in food service due to its low cost.

Common uses: Rice Bran Oil is typically used in home cooking for stir-frying due to marketing of its smoke point, despite this being a poor predictor of suitability for cooking.

Similar to EVOO, Coconut Oil is stable and safe for cooking, however it has only trace amounts of antioxidants that protect against heat damage and is predominantly saturated fat. Granted it may be a better choice than oils such as Canola Oil, Coconut Oil is still not recommended as a suitable alternative to unsaturated oils, such as EVOO.

Common uses: Often used in sautéing dishes that benefit from the strong coconut flavour, such as curries or stir-fries. It is also suitable for high temperature cooking due to its high oxidative stability. Often used in baking and sweet dishes that require a stabilizing element.

Common uses: Similar to Canola Oil, Sunflower Oil is typically used for stir-fries and sautéing despite being less stable to cook with and more prone to breaking down and forming harmful compounds.

Common uses: With a hint of avocado flavour, this oil works well in a salad dressing.

EVOO, followed by Coconut Oil, is the most resistant to heat and therefore the most suitable for all home cooking. However, on the health balance scales, EVOO is still the standout choice. Seed (vegetable) oils produce the most harmful compounds and are a poor choice. In addition, oils with a high smoke point, such as Canola Oil, Rice Bran Oil and Grapeseed Oil produce the most harmful compounds when heated at standard cooking temperatures (for all home cooking, including high-heat cooking e.g. oven baking, pan frying and even deep-frying). This demonstrates that smoke point is a poor indicator of oil’s cooking qualities.

Although the generation of polar compounds with temperature and time was more pronounced for refined seed (vegetable) oils, it is important to note that experiments were carried out without food being cooked. The absence of food in these experiments may have allowed for a greater impact of oil oxidation when compared with deteriorations reactions. To date, limited evidence is available and further research is required to test the generation of polar compounds with high temperatures with food being cooked.

In addition, for many cooking oils, such as Canola Oil, there is limited high-quality published research to assess the safety and suitability when cooking/heating. This is an emerging area, and presents an opportunity for future research in the field.

In House Validated UHPLC Protocol for the Determination of the Total Hydroxytyrosol and Tyrosol Content in Virgin Olive Oil Fit for the Purpose of the Health Claim Introduced by the EC Regulation 432/2012 for “Olive Oil Polyphenols”.

Effects of functional olive oil enriched with its own phenolic compounds on endothelial function in hypertensive patients. A randomised controlled trial.