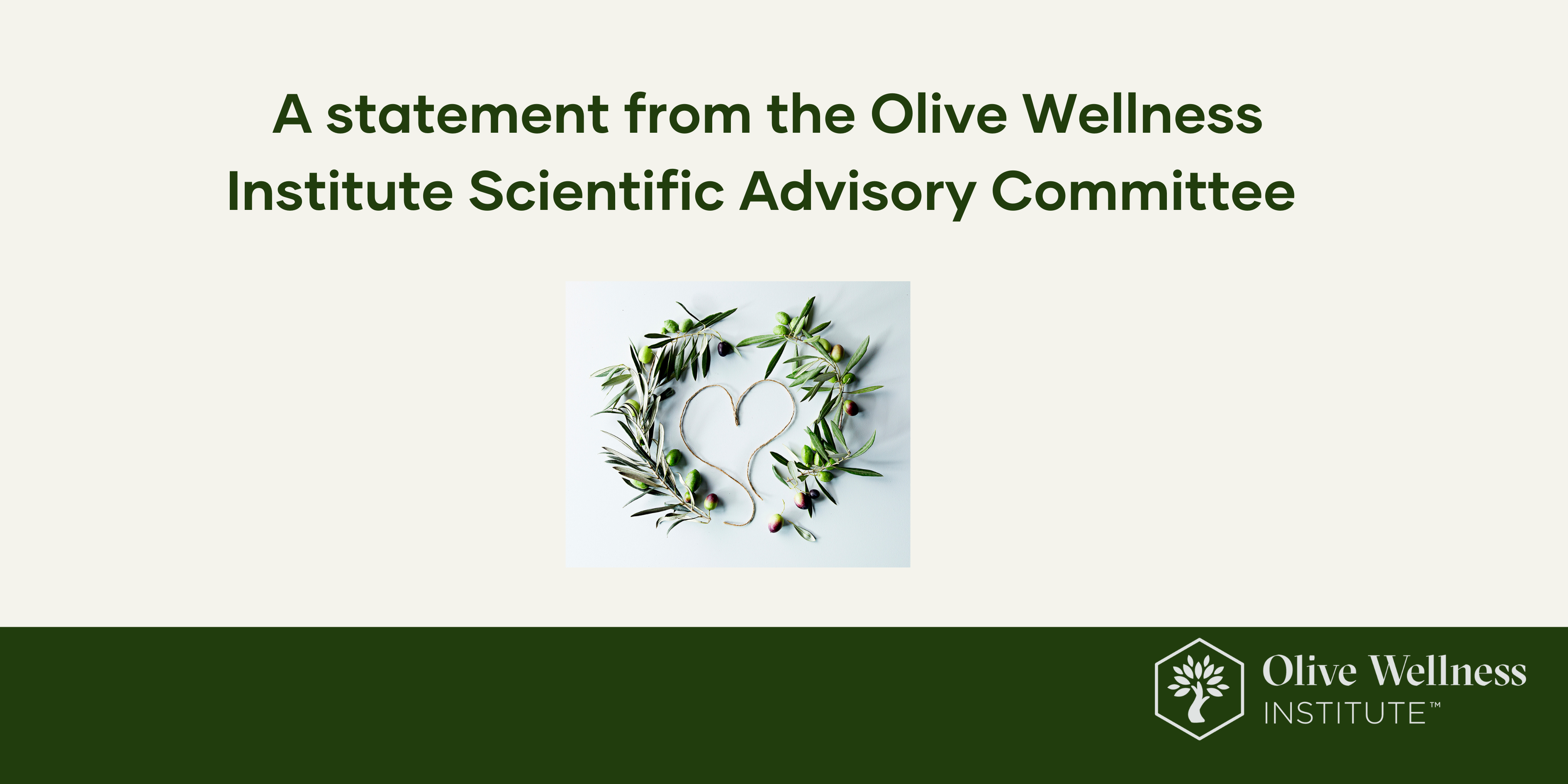 The Scientific Advisory Committee of the Olive Wellness Institute would like to comment on the recent article published in the Neurology journal titled ‘Association Between Dietary Habits in Midlife with Dementia Incidence Over a 20-Year Period’.  This large prospective cohort study of over 28,000 Swedish participants in the Malmo Diet and Cancer Study examined adherence to conventional dietary recommendations or to a modified Mediterranean diet, and at the 20-year follow-up found no association between either dietary approach and dementia risk.  We acknowledge there are clear strengths in the prospective design, study sample size and years of follow-up, however, we are concerned with the methodological approach in defining the Mediterranean diet and classifying adherence to it. We are also concerned by the extensive media attention the study has generated, most of which has focused solely on the lack of association with a Mediterranean diet and dementia risk and not the overall findings of the study which showed no association of any of the diets with dementia risk.

In this study the authors have created a ‘modified’ Mediterranean diet score that is based loosely on the validated MEDAS score, which was initially developed by the PREDIMED study investigators and has since been used extensively worldwide1. However, they have excluded key elements of the score, notably extra virgin olive oil (EVOO) (which is grouped with all other vegetable oils) and excluded key cuisine factors such as sofrito (sauce of EVOO, celery, carrots, onions and herbs used as a base to most Mediterranean dishes), as well as masking legumes by combining with vegetables. The reason provided by the authors was that the Swedish population did not normally consume these foods. Our concern with this approach is that by using a locally devised score as a surrogate for the Mediterranean diet, the authors have excluded principal sources of the anti-inflammatory and antioxidant polyphenols found in EVOO, culinary herbs and spices, and legumes. If the study population were not consuming the key staples of the Mediterranean diet, it is misleading to use a modified score that does not capture these elements.   The traditional Mediterranean diet that was shown to be associated with good health more than 50 years ago included daily consumption of EVOO as the principal fat2,3.   Like studies that use the Med diet score or other versions of a “Mediterranean diet” that do not include EVOO, this study shows no improvement in health4,5,6.

To group EVOO and vegetable oil together is not reflective of a true Mediterranean Diet, as EVOO is a crucial component of the Mediterranean diet and is responsible for many of the health benefits.  Not only do vegetable/seed oils and EVOO contain different fatty acid profiles, but they have other key differences.  EVOO is purely the fresh juice of olives, and is a unique source of dietary fat as it contains large quantities of health promoting polyphenols7,8.  These unique polyphenols are found only in EVOO and have been associated with a variety of health benefits. The same health benefits are not associated with olive oil that is not extra virgin, nor with vegetable/seed oils9-19. The strength of evidence in support of the health effects of polyphenols has even resulted in the approved health claim by the European Food Safety Authority that polyphenols protect against lipid peroxidation at a minimal dose of 5mg/kg/day which is equivalent to 23g of EVOO20.

This study attempted to offer evidence towards our understanding of the link between diet and the risk of dementia.  It is important to remember that there are multiple other high-quality studies that show a beneficial link between the Mediterranean diet that includes extra virgin olive oil and dementia as well as cognitive impairment21-23.  In fact, one could consider that the lack of impact on dementia identified in this study could be due to the lack of EVOO in the modified Mediterranean diet used. Furthermore, and as noted by the authors of the study, the assessment of self-reported dietary intake does present certain limitations due to human recall bias factors and future studies should aim to include objective biomarkers of dietary intake such as plasma polyphenols or nutrigenomics24.

While the Scientific Advisory Committee of the Olive Wellness Institute is supportive of any new evidence investigating the link between the Mediterranean Diet and disease, we are obligated to urge readers to interpret these results and the conclusion from this study with extreme caution.  Instead, we urge readers to consider the totality of the evidence, rather than focusing on this one study.

Hydroxytyrosol and its potential therapeutic effects.

Bioactive compounds of the Mediterranean diet and prostate cancer.