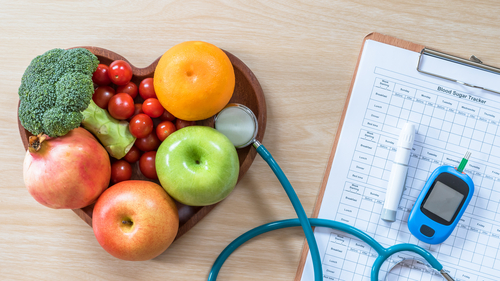 The prevalence of diabetes has more than tripled over the last 3 decades, with around 1.2 million people affected worldwide in 2014–15.1

This week marks National Diabetes Week in Australia, with the campaign “It’s About Time” aiming to raise awareness about the importance of early detection and early treatment for all types of diabetes. Early diagnosis, treatment and ongoing support can reduce the risk of diabetes-related complications.

Diabetes can be treated, and its consequences avoided or delayed with diet, physical activity, weight management, medication and regular screening and treatment for complications.

There is now substantial evidence that the Mediterranean diet is an effective dietary pattern in the prevention and management of Type 2 Diabetes (T2DM) and cardiovascular disease, the leading cause of morbidity and mortality of people living with diabetes.2-4

The Mediterranean diet is characterised by plenty of vegetables and legumes, wholegrain breads and cereals, fresh fruit, fish twice a week, dairy in moderation, smaller portions of red meat, home cooked meals and water as the main drink.5

Extra Virgin Olive Oil (EVOO) is the main source of dietary fat in the Mediterranean diet.5

This article discusses some of the latest research on how the Mediterranean Diet, and EVOO, aid in the prevention and management of diabetes.

The Mediterranean diet helps in the prevention of diabetes

Various randomised control trials (RCT’s) have shown that the Mediterranean diet, supplemented with EVOO, reduces the incidence of diabetes,6-8 with greater adherence to the diet inversely associated with diabetes incidence.6

A 2017 RCT showed that the Mediterranean diet supplemented with EVOO and pistachios reduced risk of Gestational diabetes mellitus (GDM) when compared to a low-fat diet. 8

The Mediterranean diet helps in the management of diabetes

A 2014 follow up study of a 2009 RCT showed that a low-carbohydrate Mediterranean-style diet resulted in greater reduction in HbA1c, higher rates of diabetes remission and delayed need for diabetes medication, compared to a low-fat diet.12, 13 Over 200 overweight participants with newly diagnosed T2DM were followed up for 6 years.  The Mediterranean dietary pattern included no less than 30% of calories from fat, with the main source of added fat from 30 to 50g of olive oil per day. Though only one study, this is promising given that various best-practice guidelines for management of newly diagnosed T2DM recommend lifestyle intervention first prior to medication to achieve target HbA1c where possible.4  The diet also led to greater improvements in glycaemic control, coronary risk factors and body weight.

A 2011 randomised cross-over study in Australia comparing the Mediterranean diet to usual diet in twenty-seven participants with T2DM resulted in a drop in HbA1c of 7.1% to 6.8%, without adverse effects on weight.14 In this study, average olive oil consumption increased from 6 to 65ml and overall diet quality increased significantly. The authors noted in the study that the high olive oil content facilitated consumption of large quantities of vegetables and legumes, which can promote weight loss.

A Mediterranean diet enriched with EVOO may also protect against diabetic retinopathy15, reduce body weight and improve glucose metabolism in people with T2DM.16

Olive Oil, specifically Extra Virgin Olive Oil, can assist in the prevention and management of diabetes

Olive oil as an individual food has also been shown to assist with prevention and management of diabetes.

A 2017 systematic review and meta-analyses recognized the need to specify the source of olive oil in diabetes research to fully elucidate the effect of bioactive compounds found in EVOO and not in other plant oils, including refined olive oil.18 It found that olive oil could be beneficial for both the prevention and treatment of T2DM. Olive oil interventions resulted in a significantly more pronounced reduction in HbA1c and fasting glucose compared to control groups (low-fat diet, polyunsaturated fat rich oils or fish oils). The risk of T2DM decreased by 13% with increasing intake of olive oil up to ~15–20 g/day.

A 2013 population-based study in Spain of almost 5000 participants showed that people who consume olive oil had a lower risk of obesity, impaired glucose regulation, hypertriglyceridemia and low HDL levels compared to those who consumed sunflower oil.19 The results showed that consumption of olive oil had a beneficial effect on different cardiovascular risk factors, particularly in the presence of obesity, impaired glucose tolerance or a sedentary lifestyle.

EVOO has also been shown to reduce postprandial blood glucose levels after a high GI meal in people with Type 1 Diabetes,20 and in healthy subjects.21

In the latter study, 10g of EVOO during meals was able to reduce post-prandial blood glucose levels by 20mg/dl. To put this in context, the diagnostic range for prediabetes (impaired fasting glucose) is a fasting blood glucose range of just over 20mg/dl (100 to 125 mg/dl).4

In the last few years, human and animal studies have looked at the effect of specific bioactive components within EVOO on biomarkers of diabetes. Oleuropein is a biophenol found in olives and olive products such as EVOO and olive leaves. Similar to EVOO, it has been shown to lower post-prandial blood glucose levels in healthy human subjects.22  In animal studies, bioactive compounds of EVOO have been shown to protect against pathophysiological processes involved in the development of T2DM.23, 24

Including 2 – 3 tablespoons of EVOO, as part of a Mediterranean style diet, can assist in prevention and management of diabetes

Though the impact of specific bioactive components within EVOO on diabetes is an emerging area of research, the impact of the Mediterranean diet, in which EVOO is the primary added fat, is well established.

The studies above have included volumes of olive oil or EVOO of 15 – 65ml per day, with greater improvements in biomarkers such as glycemic control often cited as intake increases.

Cooking food in EVOO has also been shown to improve postprandial insulin response in obese, insulin-resistance women25, and improve nutritional composition of some vegetables.26

Including EVOO as part of the Mediterranean diet, in volumes of 2 – 3 tablespoons per day, added to food, can prevent and manage T2DM and improve diet quality.

This can be achieved practically by including 1 tablespoon of EVOO per cup of vegetables for cooking, and also assists with the recommendation of eating plenty of vegetables to prevent and manage T2DM.9

Evaluation of the effect of dietary virgin olive oil on blood pressure and lipid composition of serum and low-density lipoprotein in elderly type 2 diabetic subjects.