The numbers are frightening. In 2017 it was estimated that 1 in 2 people will be diagnosed with cancer by their 85th birthday1-3. That means either Batman or Robin, Bert or Ernie, Bonnie or Clyde, you or me. Perhaps even more concerning is that as many as 30-35% of cancer-related deaths are linked to diet 4. And that’s not even counting those linked to physical inactivity and stress!

It’s estimated that 3-4 million cases of cancer worldwide might be avoided by adopting a healthier lifestyle5.We know that diets rich in whole grains, vegetables, fruits and legumes; and lower in red and processed meat are protective against cancer5,6. It doesn’t take a rocket scientist, or even a dietitian, to see why the Mediterranean diet (MedDiet) would have health benefits. It’s loaded with these plant-based gems, quality fats and limits processed foods. There’s some promising research that a mediterranean style diet can assist with cancer prevention by reducing risk of weight gain and obesity5 but also through some other protective mechanisms.

The MedDiet and cancer

Scientific reviews have demonstrated that the MedDiet is protective against overall cancer incidence and mortality7. One particular clinical trial has shown a 61% decrease in overall cancer incidence8. We could stop there and all pop home for a med style lunch….but it gets better. As well as the convincing evidence that med-style eating can reduce the incidence of cancer overall, data also suggests that the MedDiet is associated with lower risk of specific cancer types9,10. Strongest adherence to the MedDiet has shown reductions in risk of colorectal, breast, gastric, liver, head and neck, gallbladder, and biliary tract cancer9,10.

Figure 1 below highlights the strength of evidence for each of the reported health outcomes, including overall cancer incidence and mortality as well as the positive association with specific cancer and disease types. 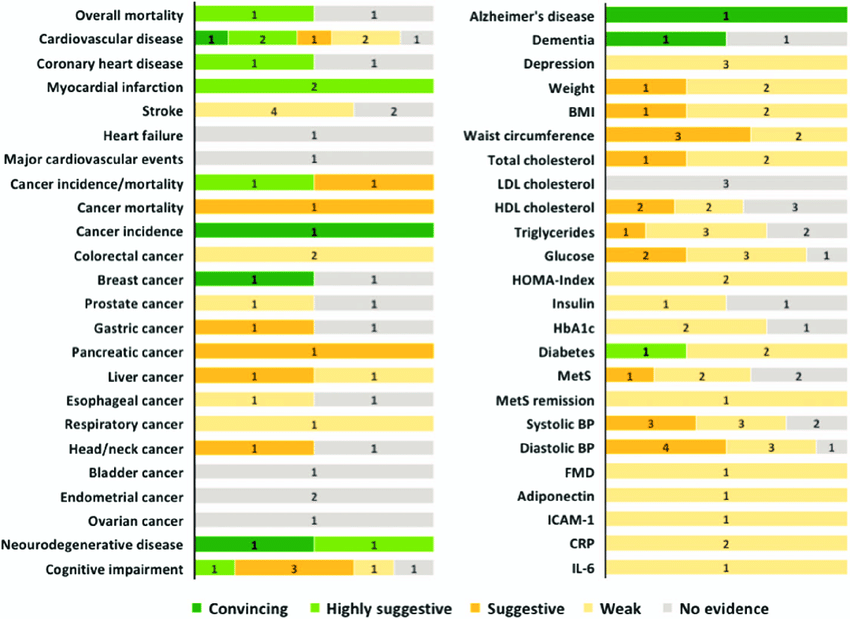 Figure 1: Summary of the strength of evidence for the evaluated health outcomes. Numbers indicate the number of meta-analyses with convincing, highly suggestive, suggestive, weak or no evidence for each outcome10.

The MedDiet: is it all or nothing?

While it is far more meaningful to consider the overall dietary patterns of the MedDiet, there are some key players that help keep these health promoting associations strong (refer to Figure 2). The EPIC study of 28 572 participants from Greece in 1994-1999 found that substantially reducing red meat intake and substantially increasing legume intake or substantially increasing intake of vegetables and substituting olive oil in place of butter was associated with a 12% reduction in overall cancer incidence11. Talk about smart swaps.

The MedDiet emphasizes intake of fish or poultry at least twice per week. Inclusion of moderate amounts of fish, including oily fish, will improve intake of omega-3 polyunsaturated fatty acids, which, in contrast to omega-6 fatty acids, have shown tumour inhibitory effects9. Our friend Extra Virgin Olive Oil (EVOO) may also play a role in reducing cancer risk. Studies have suggested that the protective effects of EVOO may be linked to the oleic acid content, as well as presence of bioactive compounds including squalene, biophenols, phytosterols and vitamin E9. These compounds, in conjunction with other elements of the MedDiet, have been found to down-regulate inflammatory pathways and reduce oxidative stress and hormones associated with cancer development. The high oleic acid content of EVOO makes it less susceptible to damage from oxidation than polyunsaturated fatty acids12-15. The biophenols in EVOO are also thought to be effective scavengers of reactive oxygen species that can lead to cell damage and disease risk. These pathways may help to reduce cancer-related mutations and overall cancer risk7,12,16.

Head to the Med

Your map to the Med in a nutshell (pun intended) :