Summary: The dietary inflammatory index (DII) is a score which can be applied to someone’s diet to measure its probable effect on inflammation in the body. In a randomised controlled trial in patients who had experienced a heart attack, we assessed whether following a Mediterranean diet improved DII score more than a conventional low-fat diet. We found that following a Mediterranean diet significantly improved DII score, i.e. the diet lead to a more anti-inflammatory diet potential, whereas the low-fat diet did not.

Chronic low-grade inflammation in the body is recognised to contribute to the development of chronic diseases, including cardiovascular disease. The dietary inflammatory index (DII) provides a method to assess the likely impact that one’s diet is having on inflammation1.

Why assess the DII?

What did we do?

In Australia, a low-fat diet is recommended for the prevention of cardiovascular disease. However, we hypothesised that a Mediterranean diet is likely to have a higher anti-inflammatory potential due to its composition. To test if this was true, we assessed: (1) the DII scores of an Australian Mediterranean diet model2 and a low-fat diet model, and (2) if DII score improved following intervention with these two alternate diet models in 56 patients who had experienced a heart attack. This pilot study from a randomised controlled trial, conducted at La Trobe University, Melbourne, Australia, has recently been published in Nutrition Research3.

What did we find?

Why did the Mediterranean diet have greater anti-inflammatory potential?

The 45 diet parameters which are used to calculate DII score include a range of macronutrients, vitamins, minerals, and flavonoids (types of bioactive substances found in plant foods), as well as herbs and spices. The composition of the Mediterranean diet lends itself to a higher composition of many of the healthy diet parameters that are included in the DII, whereas a low-fat diet does not necessarily include these foods or cuisine elements. For example, both a low-fat diet and Mediterranean diet promote vegetables, fruits and wholegrains; however, the Mediterranean diet specifically promotes extra virgin olive oil, nuts, legumes, oily fish, onion, garlic, leafy greens, herbs and red wine. These specific foods which are mostly plant-based and highly nutritious contribute to the diet’s anti-inflammatory potential.

What do these findings mean?

Other studies have demonstrated that people who have a lower (more anti-inflammatory) DII score have reduced levels of inflammatory markers, as well as a reduced risk of a range of chronic diseases, including cardiovascular disease4. This suggests that the improvement in DII score that was achieved in heart disease patients with our Mediterranean diet intervention is likely to lead to reduced inflammation and cardiovascular complications – but, more research is needed to test whether this is true. A low-fat diet is currently recommended in practice for prevention of cardiovascular disease in Australia. However, our findings demonstrated that implementation of a Mediterranean diet, which is higher in healthy fats, plant-based foods, and herbs and spices, would be likely to achieve a greater improvement in diet quality. 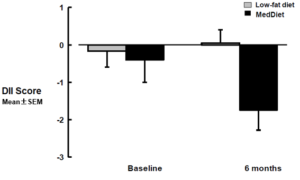 Heart Health and the Mediterranean...

Prospective association of the Mediterranean...