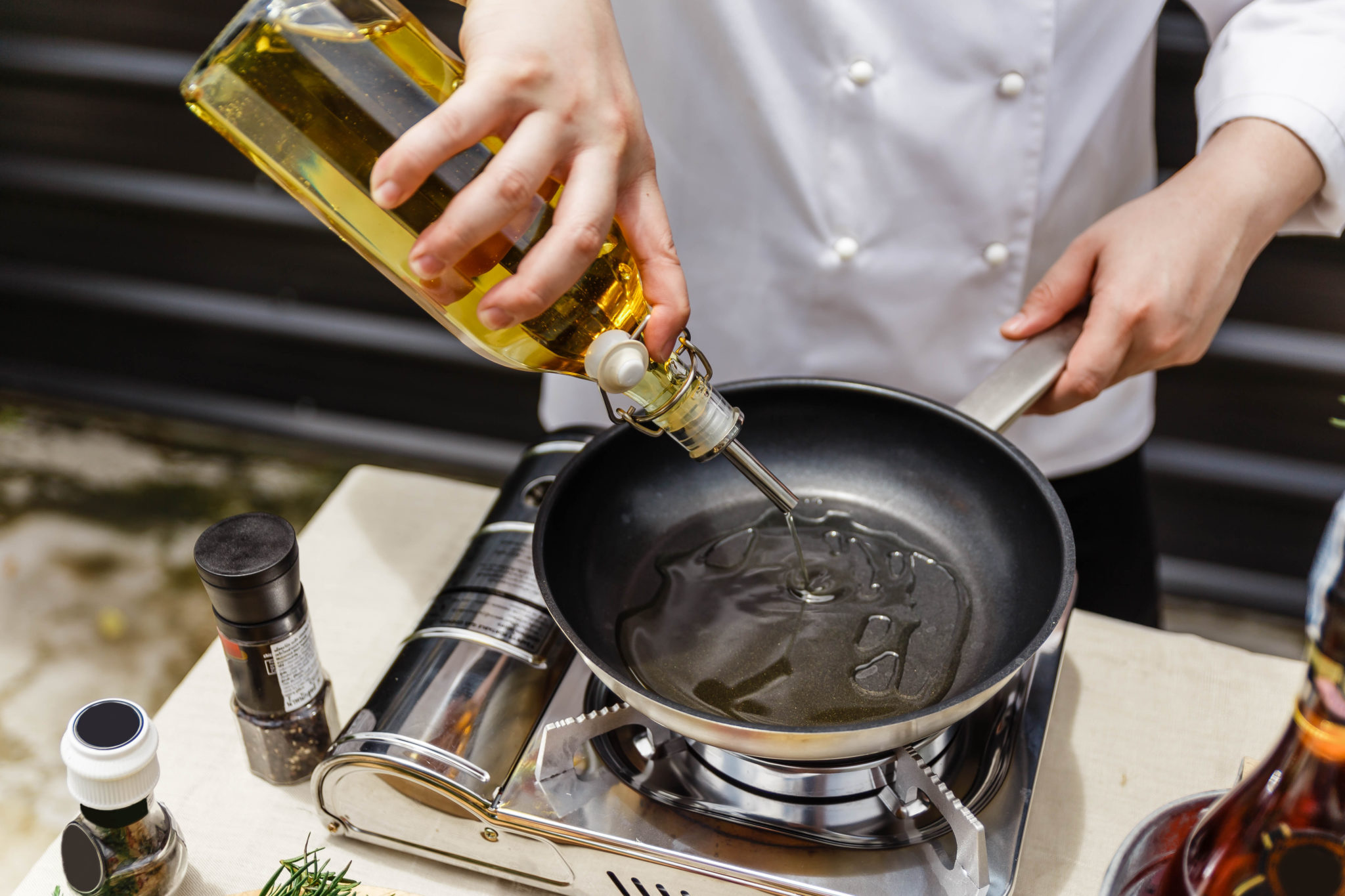 Which cooking oil is best?

This is one of the most hotly debated topics in nutrition.

To answer it accurately we must not only consider if the oil is healthy for you, but if it remains healthy when exposed to high heat.

This article examines the factors that influence how an oil reacts at high temperatures, and reveals what is truly the best oil for cooking. 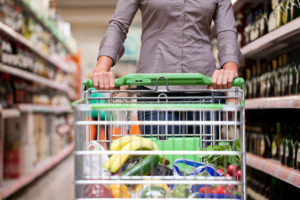 Oxidative Stability Is The Major Factor, Not Smoke Point

Cooking at high temperatures for extended periods can cause oils to oxidise faster and go bad (rancid).

An oxidised oil means it has reacted with oxygen to produce harmful compounds and toxic by-products. For example, oxidation is one of  the reasons you shouldn’t continually reuse the same oil for deep-frying.

The more an oil can resist reacting with oxygen and breaking down, the better for cooking. This quality is measured as oxidative stability and is considered by many oil experts as the best predictor of how an oil reacts during cooking (1, 2, 3).

Smoke point refers to the temperature at which an oil produces a thin, continuous stream of bluish smoke.

When an oil breaks down under heat, the flavour of the oil shifts, and toxic by-products such as aldehydes and lipid peroxides are produced (4, 5).

Contrary to what you’ve likely heard, new research indicates that an oil’s smoke point is actually a poor indicator of how stable it is at high heat and how likely it is to break down and form harmful compounds. There are several reasons why (6, 7, 8):

For these reasons (and many more), emphasis should be placed on oxidative stability rather than smoke point when choosing a cooking oil.

What Influences Oxidative Stability of an Oil?

There are three major factors that determine an oil’s stability.

Antioxidants are beneficial compounds that we need to survive, and our diet is an essential source of them.

As the name suggests, antioxidants protect against oxidation, which is the undesirable process that occurs quicker when an oil is exposed to high heat for extended periods.

2. Type and Ratio of Fats

It’s widely known that the type of fats in an oil determines its healthfulness.

However, it’s also a major factor in determining its stability at high heat.

Specifically, a fat is more resistant to heat if it contains fewer double bonds between its molecules. Double bonds oxidise and break down easier when exposed to heat.

3. Processing and Production: Natural or Refined?

Oils have various grades or classifications.

These refer to the methods by which the oil was extracted and bottled. As you might expect, the grade of an oil greatly influences its health properties and suitability for cooking.

Here is a list of the average fat ratios, oxidative stability and antioxidant content of common oils (10, 11): 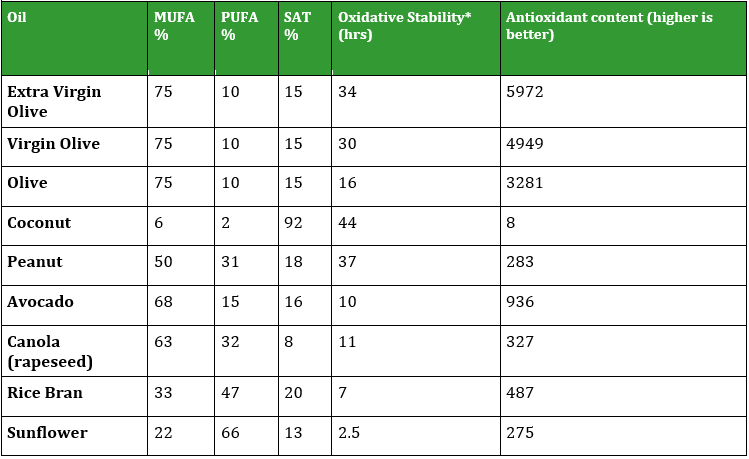 *Oxidative stability is measured via induction time. This is the point when an oil breaks down and potentially produces harmful compounds. A greater induction time indicates an oil is more resistant to oxidation, a shorter induction time means the oil will oxidise easily.

From this data we can see that coconut oil has the best oxidative stability, but this is largely due to its saturated fat content. It actually ranks the worst for antioxidant content, with Extra Virgin Olive Oil the best.

All the vegetable oils – which are refined and typically high in PUFA – have a low oxidative stability and low antioxidant content compared with the olive oil varieties. Olives are a fruit and contain naturally high levels of antioxidants. Extra Virgin Olive Oil contains high levels of these natural antioxidants, as they infuse into the oil during the pressing of the fruit.

Known Health Effects of Each Fat

If you consume an oil regularly, the health effects of its fats are important.

This is the final factor to consider when choosing the best oil for cooking.

Despite a bad reputation for decades, some researchers argue that saturated fat is neutral for health.

That is, it certainly doesn’t have health benefits, but may not be harmful for the average healthy person (12, 13, 14).

Despite this emerging idea, a number of large reviews studies and analyses show that replacing saturated fat in your diet with polyunsaturated fat (PUFA) reduces the risk of heart disease (15 ,16, 17).

This suggests that the addition of PUFA in the diet – such as omega-3 and omega-6 fats – is beneficial for health, particularly if it replaces saturated fat (which has no benefit to health).

However, the caveat is that PUFA should be consumed from fresh whole foods such as fish and nuts, rather than vegetable oils. As we have established, oils rich in PUFA have very few antioxidants and are very susceptible to oxidation when heated (18).

This leaves us with monounsaturated fat (MUFA), which makes up approximately 75% of the fat found in Extra Virgin Olive Oil and is a staple of the heart-healthy Mediterranean diet.

As you might expect, replacing saturated fat in the diet with MUFA also appears to be beneficial on markers of metabolic health, much like with PUFA (22).

Based on the weight of evidence, it’s clear that the addition of MUFA or PUFA to the diet is beneficial for health overall. However, the benefits of PUFA come from eating whole foods rather than vegetable oils, which are heavily refined and low in antioxidants.

On the other hand, oil rich in MUFA and antioxidants – Extra Virgin Olive Oil – maintains its health-promoting properties when exposed to high heat.

Extra Virgin Olive Oil is the best oil for cooking when you consider the major factors:

As you can see, this is what makes Extra Virgin Olive Oil the most suitable choice for all conventional cooking methods. This includes stir-frying, pan frying (sauté), deep frying, oven baking and BBQs.

Additionally, its available in a wide range of flavours that can complement both sweet and savoury dishes. 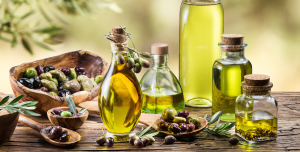 What About Coconut Oil?

Many sources incorrectly claim that coconut oil is the best choice for cooking.

Fats and oils with neutral health effects will simply add excess calories to the diet. Choosing an oil that contains healthy fats, is rich in antioxidants and fat soluble vitamins will instead increase the overall healthfulness of your diet.

Extra Virgin Olive Oil ticks all of these boxes and performs equally as well as coconut oil at high temperatures. In fact, you should only use coconut oil if you’re cooking a dish that benefits from the strong coconut flavour.

Not all olive oil is created equal.

In Australia, it’s important to choose locally sourced, Australian certified Extra Virgin Olive Oil. This ensure it is fresher and superior in quality than other oils.

This is largely due to the low amount of free fatty acids and high concentration of antioxidants that results from fresh, healthy olive fruit that is handled and pressed with care.

Not only is a high quality Australian certified Extra Virgin Olive Oil the best choice for cooking, it maintains its quality much longer on the shelf too.

To ensure you are choosing a truly high quality Extra Virgin Olive Oil, look for this Australian triangle certification symbol on the label. 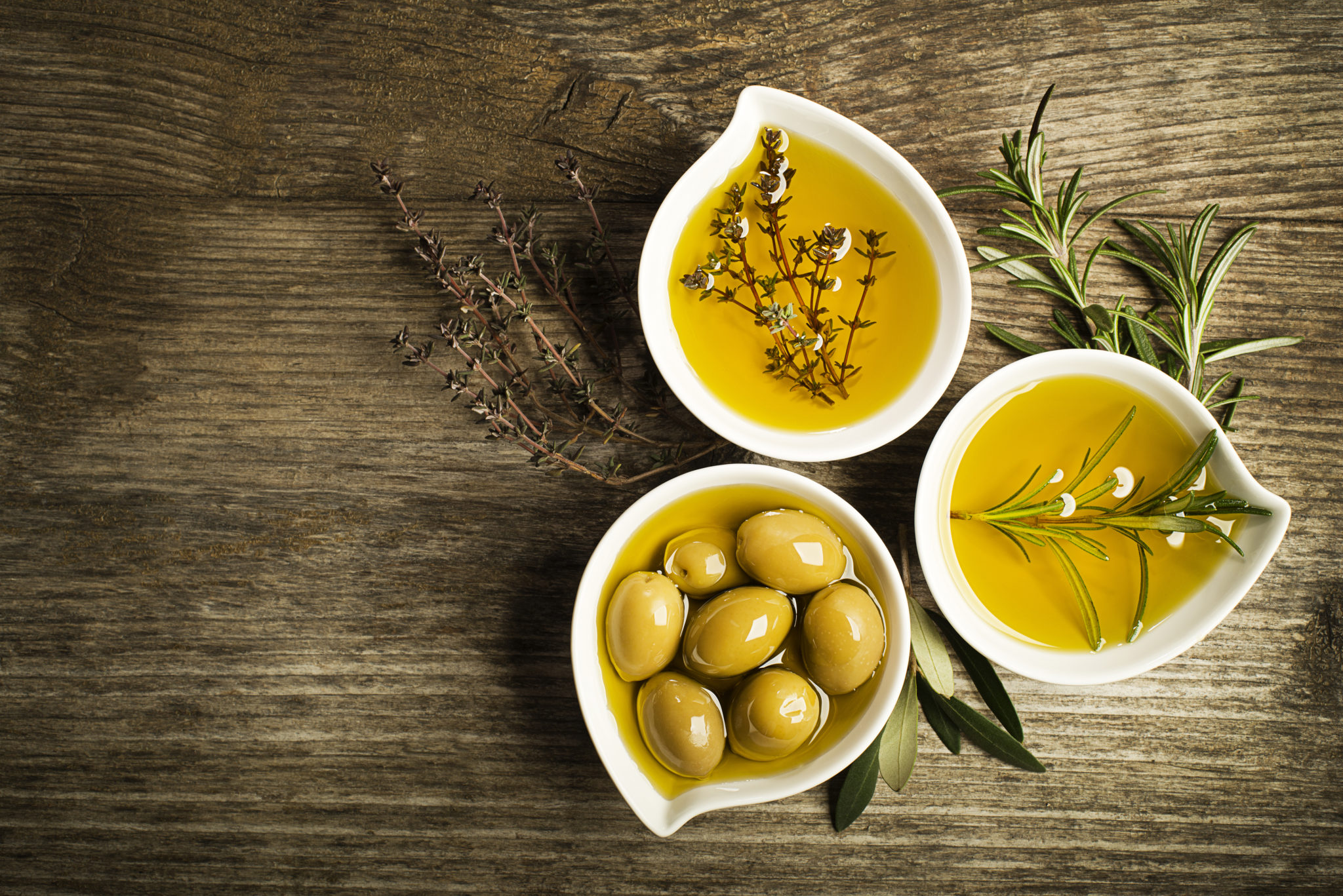 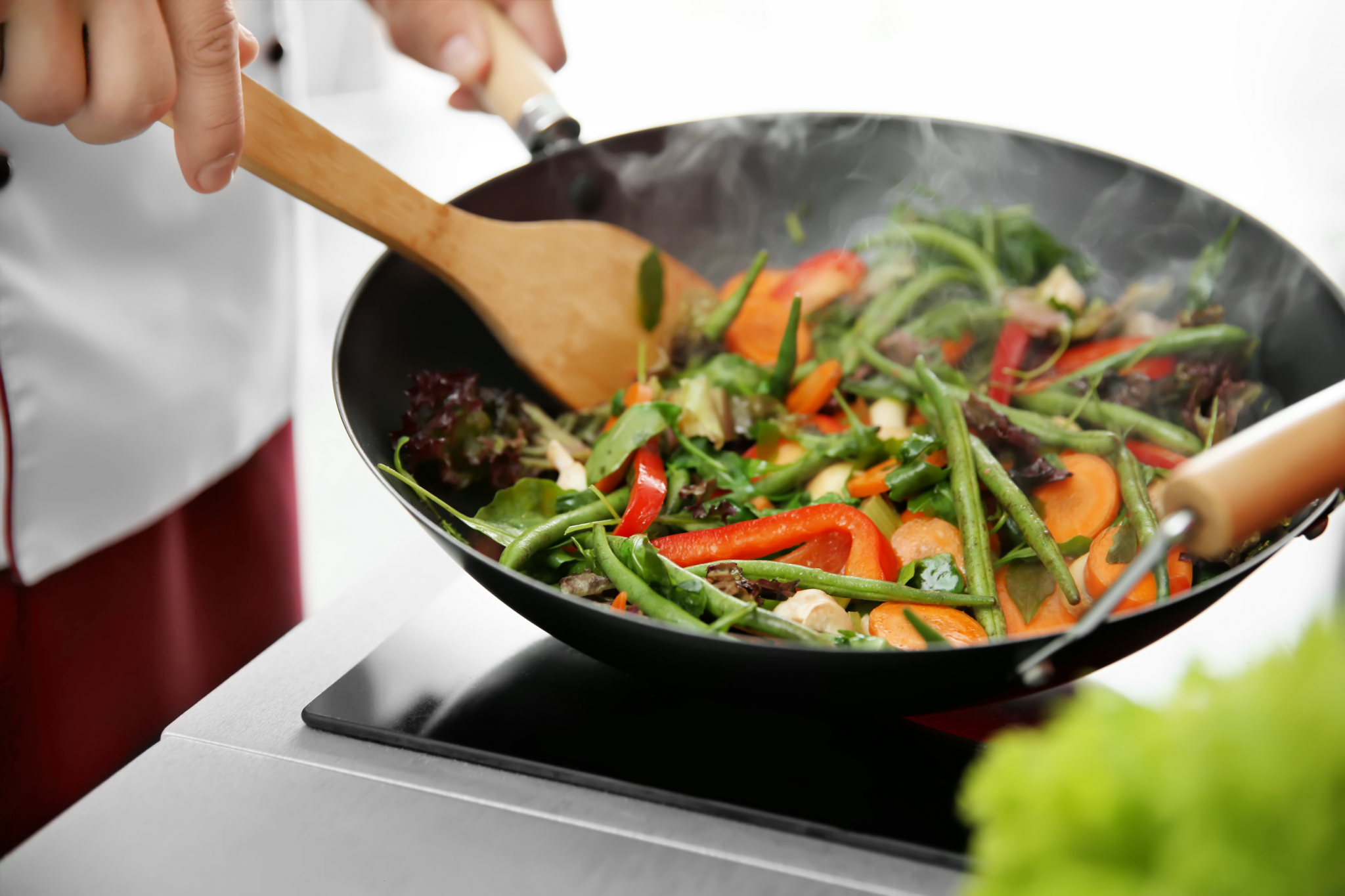 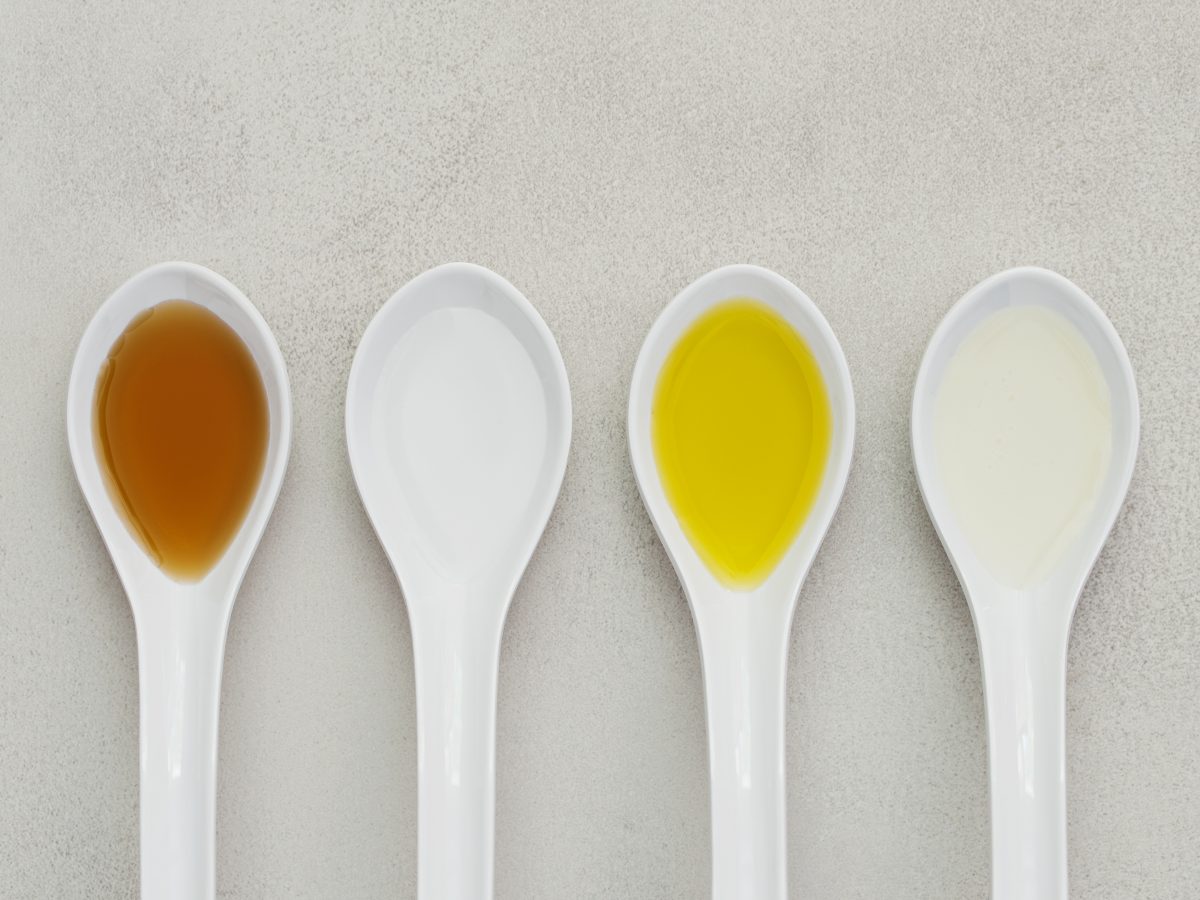 How does olive oil compare with coconut oil?