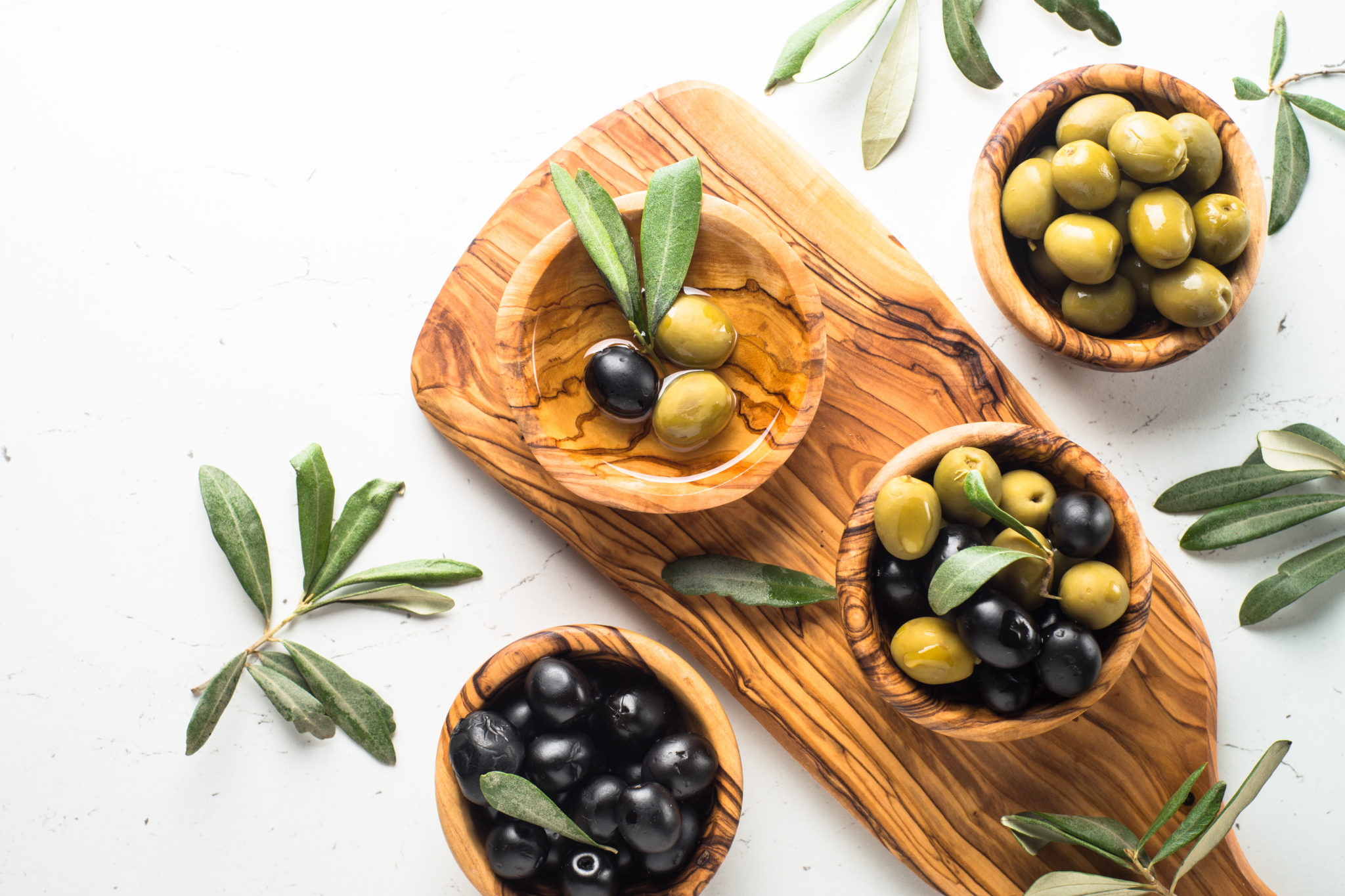 Table olives are recognized worldwide as a unique foodstuff (1,2). Their history predates written records and it is likely that hunter and gatherer populations would have eaten over-ripe olives directly from the wild olive tree or those that had fallen to the ground. The edible olive as recognized today originated from the cultivated olive tree (Olea europaea europaea L.), some 7,000 years ago. Early processing of table olives was soaking the fruit in water either fresh or from the sea ie the archaic method to remove bitter glycosides (3). Later methods developed by Romans included the use of olive wood ash to quicken processing. Early consumers considered olives an essential food. Traditionally table olives have been considered a valuable and healthy food with recorded recipes from pre-Christian times. Unlike olive oil (4) few if any studies have focused on the effects of table olives on health.

Table olives as food: Raw olive fruit is bitter because of polyphenolic compounds especially oleuropein, a non-toxic glycoside (1-3). Regardless of processing method, table olive products must be palatable, nutritious and safe to eat. Today table olives are eaten as is with or without embellishment or incorporated with other foodstuffs – hors d’oeuvre; additives to alcoholic beverages; part of hot and cold collations – salads; stews, casseroles and tagines with vegetables, meat, seafood, rice or pasta; additions to cheese, tomato and anchovies on pizzas; olive bread; plus, tapenade and olive spreads (1-3).

Mediterranean diet and table olives: Table olives and olive oil are quintessential components of the Mediterranean diet where they are consumed daily. This diet provides basic nutrients as well as functional compounds beneficial to health. Through their fat content (10-25% of edible portion) they contribute to the energy pool (around 400-1000kj/100g edible portion), that includes monounsaturated and essential polyunsaturated fats. Additional components in table olives are protein, carbohydrates, fibre, vitamins  polyphenols, carotenoids, phytosterols, triterpenic acids, squalene, macro and micro elements. Some table olives retain the sugars of the raw fruit whereas fermented olives contain little or no sugar. Californian black-ripe olives however have high levels of iron because of iron salts added during processing to stabilize their jet-black colour (1,2).

Research has demonstrated that the Mediterranean diet reduces the risk of heart disease, some cancers and degenerative diseases such as Parkinson’s and Alzheimer’s. Here, unsaturated fats – monounsaturated and polyunsaturated, antioxidants and bioactive phytochemicals characteristic of olive oil (4) and table olives (1-3) are believed to play a significant role. Evidence from, in vitro studies and animal models has provided some insights.

Table olives contribute to the omega-3 fat pool in the Mediterranean diet supplied by seeds, fish and nuts. Overall omega 3 fats are anti-inflammatory whereby they reduce the risk of heart disease whereas omega-6 fats help lower LDL cholesterol. The ration of omega-6/omega-3 fats is around a favorable level 8:1. Excessive amounts of dietary omega-6 and a high omega-6/omega-3 ratio, are pro-inflammatory encouraging the pathogenesis of problems including cardiovascular disease, cancer and immune diseases whereas increased intake of omega-3 with lower ratios can be beneficial.

Antioxidants and table olives: Table olives contain several phytochemicals in the edible portion with antioxidant activity including polyphenols, Vitamin E derivatives and carotenoids. Antioxidants from table olives are part of the broader intake of dietary antioxidants from other sources – mostly fruits, vegetables, nuts and seeds, herbs, spices as well as beverages such as tea, coffee and red wine. Overall antioxidants are believed to reduce the risk of some cancers, cardiovascular disease and degenerative diseases.

Polyphenols are considered to have, anti-inflammatory, anti-allergic, anti-atherogenic, anti-thrombotic, antibiotic and anti-mutagenic effects as well modulate the human immune system. Fermented black olives rank highly as an important source of dietary polyphenols especially hydroxytyrosol (1-3). However, some dried table olives retain a proportion of the parent polyphenol oleuropein (2), that is generally lost when table olives are prepared by fermentation or by chemical methods with alkali. Based on European Food Safety Authority recommendations of 5mg/day of hydroxytyrosol, 10 olives will make a significant contribution to the hydroxytyrosol pool.

Vitamin E derivatives especially α-tocopherol are believed to play a role in the prevention of cardiovascular disease, atherosclerosis and cancers. However, table olives have much less of these compounds than corresponding olive oils. As part of the Mediterranean diet the  combination of olive oil and table olives, consumed will contribute to daily requirements of Vitamin E. 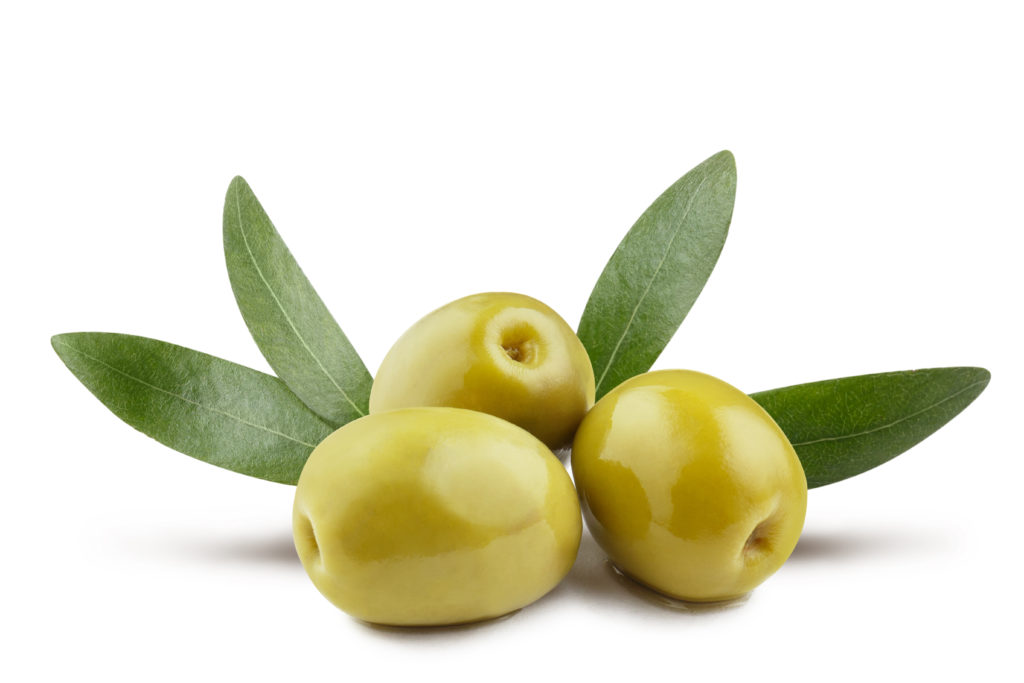 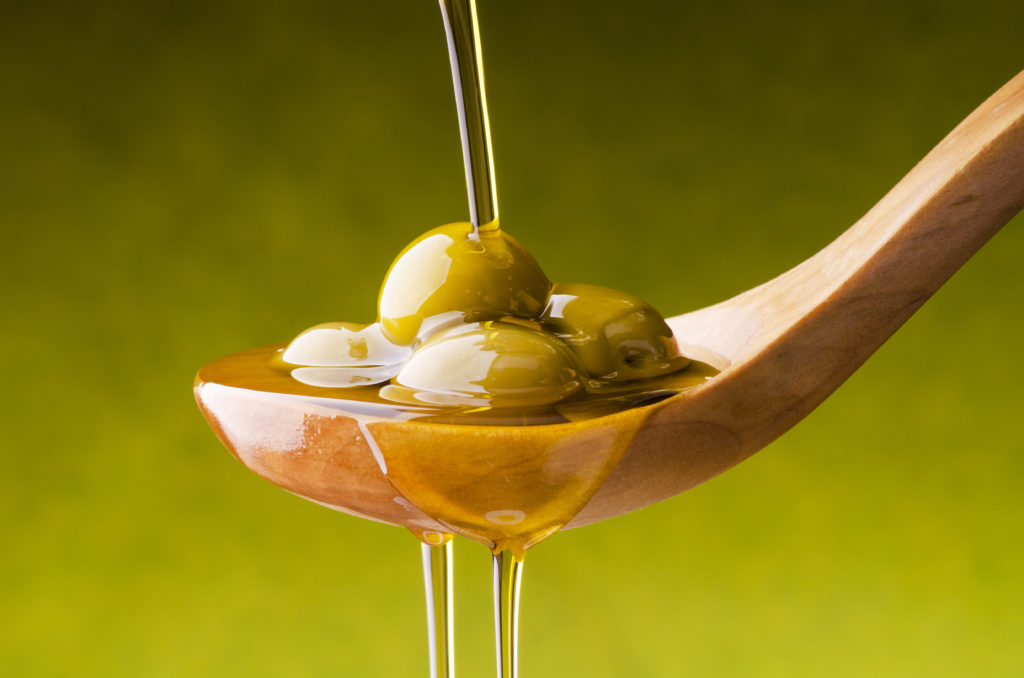 Terpenoids and table olives: Terpenoids like maslinic and oleanolic acids, present in table olives, have anti-inflammatory and antioxidant actions,as well as of benefit as anticancer, antidiabetic, cardioprotective, antihypertensive, antihyperlipidemic, antiviral, antiparasitic, insecticidal agents. Table olives represent the highest dietary source of these compounds with maslinic acid > oleanolic acid, and much higher than in corresponding olive oils. A number of preclinical studies have revealed evidence that terpenoids similar to those found in table olives, or synthetic derivatives possess chemo-preventive actions against various cancers including skin, prostate, breast and colon. The level of triterpenic acids in several types of commercial lye treated black and green olives ranged from 460 t0 1470 mg/kg fruit representing a much higher value than reported for virgin olive oils. However natural black olives, processed without lye, had a higher concentration 2000mg/kg (6,7).

Squalene and table olives: Table olives, olive oil and shark oil are rich sources of squalene. Shark oil, as a source has become unpopular source, because of animal welfare concerns and the presence of cancer-causing pollutants. Therefore, table olives and olive oil, available worldwide, are very attractive and practical sources. Squalene is thought to have anticancer and antiaging properties. It is considered to have both preventative and therapeutic effects against growth of colon, skin, lung and breast tumours. Squalene is also believed to stimulate the immune system facilitating drug therapy in medical conditions such as HIV, H1N1, leukaemia and papilloma. Squalene levels in 30 different olive samples a ranged from around 500 to 1500mg/kg (8).

Most table olives produced by fermentation are potential sources of probiotic microorganisms such as lactic acid bacteria and yeasts as long as they are not preserved by pasteurization or sterilization. There is evidence that probiotic organisms attached to table olives can successfully transit the gut appearing later in faecal samples in significant numbers. Research with specific targeted probiotic microorganisms, added as starter cultures, is also producing promising results. Here raw olives, heat shocked to neutralize endogenous microorganisms on olive skin, are fermented with specific probiotic starter cultures. After consuming 12 green Sicilian olives, carrying approximately 20 x 106 lactobacilli, daily for 30 days, antioxidant and anti-inflammatory effects as well as reduction of fat mass and an increase muscle mass were observed in the study group (9).

Attempts have been made to deconstruct the Mediterranean diet with respect to the health benefits of its components such as table olives, olive oil and others without avail. The value of the diet is the sum activity of its components and the insensible way  that nutrition and health benefits are delivered to its consumers. With respect to table olives, around 10 medium sized olives/day will safely deliver significant amounts of nutrients and beneficial health promoting compounds.